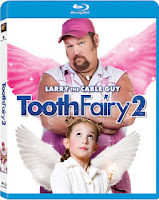 Get Ready For Laughs in spring’s funniest fish-out-of-water comedy with heart starring everyone’s favorite tough guy (…in a tutu!)

TOOTH FAIRY 2 On Blu-ray and DVD March 6
The comedy with bite is back and funnier than ever,TOOTH FAIRY 2 arrives on Blu-ray and DVD March 6 from Twentieth Century Fox Home Entertainment. The one man comedy phenomenom Blue Collar Comedy Tour’s Larry the Cable Guy (Cars, Cars 2, and History Channel’s Only in America) sinks his teeth into this outrageous follow-up to the 2010 theatrical hit Tooth Fairy.

Larry Guthrie (Larry the Cable Guy) is a fun-loving dreamer with a serious mission: win back the love of his life before she makes a terrible mistake and marries the wrong man!  In his attempt to get back on his long lost love’s good side, Larry visits the school where she works and make’s a horrible mistake…  He accidentally tells a child that the Tooth Fairy is just a myth.  Crushing the child’s dreams sets off a chain of events that are far more than Larry bargained for including being  “sentenced” to become a Tooth Fairy or face  having his memories erased for good…PLUS losing any chance of getting back the girl of his dreams!  Larry is brought before a 500-year-old Tooth Fairy stuck in a 10-year-old girl’s body (played by newcomer Brady Reiter) for sentencing.  The Tooth Fairy demands that Larry make retribution by temporarily serving as a Tooth Fairy and proving that Tooth Fairies really do exist. His mission?  Larry must collect 20 teeth in 20 days. With his orders in hand, Larry embarks on a journey to prove the existence of Tooth Fairies and to win back the love of his life.

It’s tutu times the laughs watching Larry strut his stuff in pink tights and ballet shoes as he tries to prove he can git-r-done! 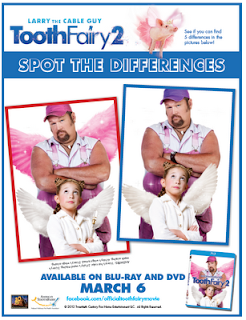 Inspired by TOOTH FAIRY 2
The comedy with bite is back and funnier than ever;TOOTH FAIRY 2 arrives on Blu-ray and DVD March 6 from Twentieth Century Fox Home Entertainment. The one-man comedy phenomenon, Blue Collar Comedy Tour’s Larry the Cable Guy (Cars, Cars 2, and History Channel’s Only in America) sinks his teeth into this outrageous follow-up to the 2010 theatrical hit Tooth Fairy.During the film, Larry is an average man who undergoes a magical transformation to become a tooth fairy. In this feature, we will highlight other movies where normal guys are touched by something magical or supernatural to become extraordinary, including Spider-Man and the Harry Potter series.

In 2002’s Spider-Man, Tobey Maguire portrays Peter Parker, a high school student who is bitten by a genetically engineered spider. Following this, his life dramatically changes as he develops keen senses and reflexes, extra strength, and the power to shoot webs from his wrists. Once average Peter discovers his newfound strengths, he must juggle his normal life with his new crime fighting activities and secret identity.
The Harry Potter Series

In the Harry Potter film series, which began in 2001 and concluded in 2011, young Harry Potter (Daniel Radcliffe) goes from being an ordinary 11 year old boy to being the savior of an entire world he never knew existed! After being transported to an amazing wizarding world, Harry finds his world turned upside down and is surrounded by people who know more about his life and parents than he does. In this new environment, Harry begins to strengthen his magical powers and works towards fulfilling his destiny.
Groundhog Day

In 1993’s Groundhog Day, Bill Murray stars as Phil, an egocentric weatherman who – much to his chagrin – is in Punxsutawney to cover Groundhog Day. Unfortunately for Phil, due to a bit of unexplained magic he finds that the day keeps repeating itself, so his most hated day of the year becomes his entire life! After becoming a crook, a glutton, and attempting suicide numerous times, Phil begins to try to make his life better, taking piano lessons and learning foreign languages, in order to help him woo his beautiful news producer, Rita (Andie MacDowell).
Jumanji

Jumanji is a 1995 film about a supernatural boardgame that makes wild animals and parts of the jungle materialize as people play it. After Alan (Robin Williams) is sucked into the game as a child, his friend, Sarah (Bonnie Hunt) abandons the game, leaving Alan trapped. When two children find the game and begin playing many years later, Alan is freed as an adult, and must continue playing the game until someone wins in order to restore their world to how it is meant to be.
The Neverending Story

The Neverending Story is a 1984 film adaptation of a German novel of the same name. In it, an unpopular boy is bullied by other children and hides from his tormentors in a bookstore. There, the shopkeeper gives him a magic book, which allows the reader to become part of the magical story. Soon, he realizes that the characters in the story are aware of him, and that his imagination can help save the magical world and its inhabitants.
One (1) of my lucky readers their very own copy of Tooth Fairy 2 on DVD.
a Rafflecopter giveaway

I was not compensated for this review. I was offered a product or products to give my honest and fair opinion. You experience and opinion may vary.

Because Larry is a funny guy, I'm sure he did a good job.

I'm not really that excited to see it, but my kids would like to see it. cwitherstine at zoominternet dot net

I entered the Phantom of the Opera giveaway. cwitherstine at zoominternet dot net

Yes.I would be excited to watch this,I liked the first one..this one sounds great too!
ksceviour at hotmail dot com

Can't wait to see it. I love Larry the Cable Guy!

Yes, I'm excited because it's funny and I can watch it with the whole family.

Yes! I think it is gunna be so funny

Yes, because it looks like a fun family movie.
Thanks!

I liked the first Tooth Fairy movie and enjoyed watching it with my son. We like Larry the Cable Guy and hope to enjoy him in this movie. Thanks for the chance.
bekki1820cb at gmail dot com

I know my daughter would love it. That is enough for me!

I laughed my butt off at the first one and I love Larry the Cable Guy so I'm sure I'll laugh even harder.

I would love to see this with my niece. We both have a great sense of humour and both love to laugh.

Hope win this one!

Looks like a funny movie to watch with the family

My kids would like to see it.
Thanks for the chance!

I am excited because it has Larry the Cable Guy in it, I would love to watch it with my grandchildren.
Entered: Strawberry Short Cake
thanks so much for the giveaway
My GFC name: Carolyn Ann Colley (Griffith, Smith)

I cant wait to see it. it looks so funny and i would love to watch it with my boys. thanks

I entered the uncle milton and the strawberry shortcake dvd giveaways. thanks

My daughter loved the first DVD - would love to add this one to our collection, too. Thanks

We have the first dvd and think larry is hilarious.